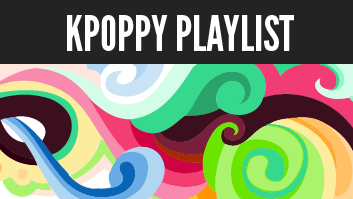 Halfway! We've arrived.
2018 isn't playing around. I've really enjoyed the year's music so far. Around this time last year I was collapsing under the weight of Kpop going super far into weird experimental Frankenstein territory. Thankfully, that chilled out by the end of the year. These six months since have felt pretty great. A nice balance between weird and good. Everything still feels very listenable. There's a strong showing for mainstream stuff this year. I usually feel like my odd indie picks dominate. Not this time!

Tropical House gave way to Future Bass, but both are still present. As I figured it would, the Despacito trend hit Kpop with the influence of Latin rhythms. Maybe not as intensely as I would have predicted. I've been adding to a playlist for the trend. There is some overlap with Trop House and Moombahton in there, but I think the shift is fairly distinct from the last couple years. My Latin rhythm playlist is available now and I'll continue adding to it into the future. Feel free to comment or @ me if you have recommendations to add (@AlleyBetwixt).

Fashion trends? Not much out of the ordinary. I noticed a lot of strappy buckles and bondage harnesses, but that was for weekly music show performances: Dreamcatcher, Wanna One, BTS, etc. It showed up less often in MVs. Interesting one.

BTS finding so much success and momentum in the West is definitely bringing way more attention to Kpop from major players. Billboard and Grammy have had quite regular features for a while now. It's amazing to see how far and fast this has come. Also slightly terrifying.
Let's get to the music!

Further thoughts on selected tracks and a few honorable mentions in the full post.


MOMOLAND - BBoom BBoom
-- Huge potential for song of the year. I'm not a massive fan of it, but the video, song, and choreo hits this classic Kpop nerve that a lot of people have responded to in a big way. I can totally appreciated it for that. GREAT!

Kate Kim - So Long, Baby
-- One of my absolute favorites so far. That 'Do Re Me Fa Sooo...' part gets stuck in my head, won't let go, and I never tire of it. Killer vocals. Great track outta nowhere.

Zagmachi - God's Lament
-- Love the song. Love the video. Love the concept. Love the dancers. Love the weird. I'm so glad I stumbled onto this thing. Puts a huge smile on my face every time. Whale is my bias and God is my bias-wrecker. Lol.

NCT U - Baby Don't Stop
-- Been pretty disenchanted with the SM Entertainment machine lately, but like lightning out of the clear blue, comes Taeyong and TEN. This is my #1 thus far. Strong contention to top the 2018 Eclectic Mix at the end of the year. I might be chemically dependent on this song. I'll have it playing on loop 10 times in a row and have to force myself to play something else. It's that lower end and relentlessly percussive beat that has found a permanent home in my heart. Oh, and great dancing!

djfriz (feat. MRSHLL, Megan Lee) - Dive
-- MRSHLL MRSHLL MRSHLL !! I love this guy's voice so much. I love the album he released. More on that later. djfriz did a couple of tracks with him accompanied by this animated story narrative, which is so interesting and ethereal. I'm all about it.

EXID - LADY
-- The full 90s experience. J-Hope's 'Daydream' is also in this realm and there have been a bunch more pulling from the era. I was really happy to see EXID go for a sound very different from what they've been doing since UP&DOWN. Still missing Solji's presence, but everyone is looking and sounding good here.


PENTAGON - Shine
-- Along with BBoom BBoom, Shine is contending for song of the year. IKON's 'Love Scenario' is also up there, but I think of Shine as it's superior cousin. Anyway, Shine is the truest of bops. It's the kind of jam that gets everyone crazy hyped just from the opening notes. Also, the vocals are really strong? I'm not very familiar with Pentagon, but the two(?) primary voices in the chorus are well-performed and captured in production. The BlocBoy Shoot dance meme was picked up in a few Kpop dances this year, but most will probably associate it with Shine.

The Rose - BABY
-- Favorite rock track. The Rose is rock solid. More of that percussive quality I'm enamored with. I always like what they do with the vocals, too. There's something fragile but aggressive about them I love.

Gaho - Stay Here
-- Top ballad for the first half. Funnily enough, my two favorite ballads are Sojung's and Gaho's and they're both named 'Stay Here'. Huh. Both are gorgeous. Gaho's is just a perfect piece of music that has everything I like in a ballad. It's not boring. It's got power and oomph. It's emotionally resonant. It resolves beautifully.


V (BTS) - Singularity
-- Favorite video experience of the year. LUMPENS still has it going on. I'm not always the biggest fan of Taehyung's voice. Sometimes he pushes it to this very affected style I don't care for. But here I think it works perfectly for the atmosphere and mood of the song. It's ethereal and creepy. The disembodied-hand-in-the-jacket choreo is great. Keone's work, I believe. This whole thing is just an experience. A unique one for Kpop, I'd say. I had a strong response to Jimin's 'Serendipity' as well. This is like the reverse mood to that one, which is cool. Getting dumped into a frozen lake vs. basking in sunlight.

GUNTAC - Camellia
-- New favorite indie artist? This dude's voice just sounds so cool and I like the vibe. His other track 'Hollywood' is also pretty tight.

PRISTIN V - Get It
-- There's nothing super special about this track, but I think most Kpop that is this heavy on synth and layering tons of elements usually sounds very cluttered. I don't feel that with 'Get It'. It sounds so clean for how bombastic it is. It changes up enough throughout that you have room to breathe and enjoy when the sound goes big.

Taeyeon - Something New
-- Weird dark video. I like that low end, that bassline, and the rolling groove. Gave me a similar feel to her song Got Love from last year, which I also loved, but was polarizing to many Kpop fans.

Lee Jin Ah (with GRAY) - RUN
-- This was a dreamy fusion of styles and artists I'm a fan of. It didn't disappoint.I often love tracks that are near impossible to categorize by genre.

Okay, a few honorable mentions. AOA's 'Bingle Bangle' tried really hard to get on this list. Fun song. Fun MV. Fun choreo. Same thing with 'Giddy Up' by The Boyz.

B-sides and other tracks of interest:

Park Hyo Shin's 'Sound of Winter' is an ethereal and transformative experience.

BTS's 'DDAENG' was a special track released for free during the group's debut anniversary Festa. It's a response to all of the critical analysis being done by entertainment companies and industry insiders trying to figure out the 'formula' and reasons why BTS became massive. It's simultaneously hilarious and savage. RM's sweetly soft stuttering verses are especially magical.

BTS's '134340' barely feels like a Kpop track. I loved the entire album except for the lead Fake Love. 134340 is probably the most weird. Jazzy flute solo retro R&B kinda feel. Really impressed me.

Hyukoh's 'Citizen Cane' is just a killer song in general. It ended up trending super high on Youtube because it was used in an Apple commercial for Animoji, I think? Fun.

A bunch of the girl groups that came out of the Produce101 second season have some momentum now, so I'm curious to see how the summer season will go. Hopefully we'll get some great season anthems.