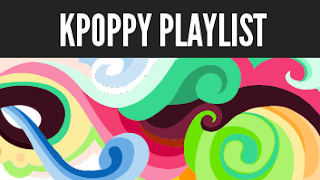 
Highlighted videos and my thoughts on them below.
Some bonus non-single tracks I loved at the end!


I've played this so much since it was released. Never cared for Dal Shabet until this. Sometimes Brave Sound just nails it for me.

The contrast of the contemporary R&B sound with the traditional Haegeum instrumental makes me keep coming back to this one. Pleasing voices from the guys. And even though Jessi's voice often sounds harsh, I appreciate it here.

Not a fan of the video, but this beat is intoxicating. As One's voice changes it up nicely for the bridge. Then it dives right back into that satisfying percussion. I still put this on loop sometimes. Every time it ends I immediately want to listen again.

I've always like Yoon Jong Shin's unique tone, but lately he's put out some incredibly interesting monthly project tracks. Tablo's great. It makes me think of David Bowie for some reason... maybe because he had passed just a few days before this was released. Something about the vocal and beat too though...

Exactly the same dilemma with this one that I had last year with Vibrato. Cool song. A touch of the Major Lazer kinda sound popular in the west recently. But again the video seems to be attempting a commentary on objectifying/sexualizing the bodies of women... while fully committing to the practice itself. Meh.

Ethereal. Reminiscent of Dido or something like an Irish hymn. Cool voice.

Somehow I feel like I was tricked into this one. This sound and style is really not my thing. Really. Why am I compelled to honor this insanity? IT'S INTERESTING, OKAY?!!! XD

It has been a miserable couple of weeks for old DBSK and JYJ fans. But if we can ignore the potential horrors of his bandmate's behavior, we can enjoy rock Jaejoong and this celebration of people working hard at their craft.

Moonbyul's rap part notwithstanding, this song is my jam. I prefer it to their single. That vocal love.

I'm sure some sound/production quality argument could be made here. Lots of tuning going on. But that pan pipe kinda sound in the chorus... I DON'T KNOW WHAT IT IS, BUT I LOVE IT. It's also a song where the energy dramatically changes between the verses and chorus, but it all still feels cohesive to me.

One of my favorite Kpop songs of all time is Mighty Mouth's Tok Tok with Sora featuring. This is right in the same vein and it makes me so happy.

The other (hopefully) non-criminal element of JYJ. He's nearly 30 and still dancing like he's a teenager. I adore the video. A ton of interesting symbolism.

Might be a perfect track for Luna to show off both her vocal ability and dancing.

A rare-to-Kpop punk feel that I dig. Rad collab for these unnies.


Some of my favorite tracks this year have been MV-less. I'll showcase four of them. Something they all share in common is an accompanying live performance that I thoroughly enjoyed.

Two of them came out of the PRODUCE 101 show, which I was pleasantly surprised to enjoy.

At The Same Place [audio only link]

They have both been dominant earworms since March.

At The Same Place shares a producer in common with my next favorite. B1A4's Jinyoung also created...

Oh My Girl - One Step, Two Steps  [audio only link]

LIAR LIAR was also cool, but this right here might be in my top 20 Kpop songs of all time. Seriously. And the choreography is so playful and energetic, it makes me smile.

Finally, I'll cap things off with a gratuitous fangirl moment. Yeah, being a JYJ fan has been rather horrifying due to whatever the hell is happening with Yoochun. But these guys have lived quite separate lives since DBSK split and Junsu has been forging ahead with his solo career at full speed. His XIGNATURE album will be his last full album before enlisting. The lead track, ROCK THE WORLD, was featured above in all it's dancing glory. But my favorite track on the album is Tonight.

It's strictly a vocal performance from him, but the way he sounds live will always be special to me. You don't hear a tango rhythm out of Kpop every day. It's composed by SURAN, who I also love.
That fading out acappella bit at the end. Yes, please.

Which videos will make it to the end of the year list?!
We shall see!